Five billion dollars is a lot of money for a company to pay for wrongdoing.  But if the company has a market capitalisation of more than $500 billion and more than $20 billion in cash reserves, how painful is a $5 billion fine?

The company in question is Facebook.  The business disclosed an anticipated fine of three to five billion dollars in its quarterly financial report published on 24 April.  Kara Swisher, a New York Times columnist, commented: “It’s a parking ticket.  Not a speeding ticket.”

Among other things, the FTC has been investigating whether Facebook violated a 2011 agreement to improve privacy protection.  The company denies it broke the agreement, which was meant to ensure it became more transparent about sharing personal data with third parties.

However, prior to the US presidential election in 2016 Facebook was used by the British company Cambridge Analytica to harvest data without user consent to build voter profiles that could be targeted for political purposes.

With regard to the fine, the Facebook report said: “The matter remains unresolved, and there can be no assurance as to the timing or the terms of any final outcome.”

So how come the company’s share price rose by 5.3 percent to $191.16 after announcing it would be paying so much money?  Clearly investors don’t see the $5 billion fine as damaging to the company and its prospects.  Presumably they see it as a chance to wipe the slate clean and move on. 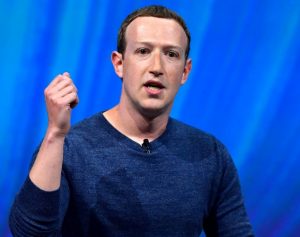 Mark Zuckerberg, 34, the company’s founder and chief executive, said: “We are focused on building out our privacy focused vision for the future of social networking.”

Before he was fired by President Trump, James Comey, the former FBI Director, told a cyber security conference: “There is no such thing as absolute privacy in America.”  His argument was that government should legally be able to penetrate internet encryption.  He pointed out that in the last four months of 2016 the FBI gained access to 2,800 devices in criminal, terrorism and counterintelligence investigations, but that encryption prevented the Bureau from accessing 43 percent of those devices.

Apparently Facebook, as a commercial organisation, should get its house in order, but if the government feels justified in shredding the privacy of citizens that’s all right.  The extent of the U.S. Government’s illegal intrusion, as revealed by whistleblower Edward Snowden, suggests that we cannot be as trusting of governments as they would like us to be.

Facebook may be an egregious violator of individual privacy.  And governments may think they can correct corporate behaviour with fines.  At the same time they are telling citizens they have nothing to fear from government intrusion.  Does this represent a convergence of interests?

Mark Zuckerberg would seem to agree.  He reassured investors, saying: “I understand that any regulation may hurt our business, but I think it is necessary.”  In a recent piece he wrote for The Washington Post he added: “I believe we need a more active role for governments and regulators.”

Last year an American writer named John Perry Barlow died in San Francisco.  He is described by Wikipedia as a “cyberlibertarian.”  He wrote: “Relying on the government to protect your privacy is like asking a peeping tom to install your window blinds.”

Facebook may need disciplining, but whether a $5 billion fine will have the desired effect is questionable.  Governments may need to conduct investigations, but whether we should trust them with absolute access to our private lives is equally questionable.